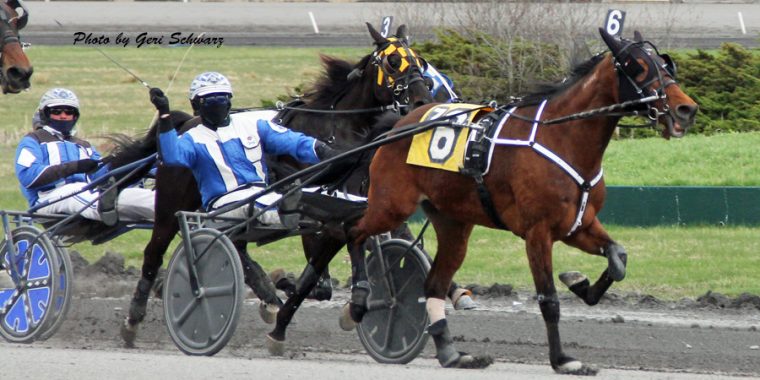 Just 4 months ago Finish Line was racing in NW of $1,000 in his last 4 starts, since then he has continually ascended the ladder, he may be suffering from an identity crisis as he has been claimed 3 times in the last 5 starts. This was his first start for his new trainer Ralph Silvestri III and it was the first time that Michael Merton sat behind the 10-year-old gelded son of Yankee Glide. Onemoreswan (Jim Devaux) sprinted off the gate to get the lead and reeled off splits of 28.4, 59.2, just past the half Finish Line was on the move, at the 5/8 marker he applied the pressure to Onemoreswan, the pair were head to head. Herman Swartzentruber driving Shoot The Thrill were ranging into contention in a spirted stretch drive but Finish Line was not to be denied and won by a neck over Shoot The Thrill in 2:00.3

The model of consistency Cinnamon Stick, who in 17 starts has 7 wins 1 second and 5 show finishes notched his seventh win of the year, it is the most wins for a trotter on the grounds. This afternoon Greg Merton eased him off the gate to settle in 3rd, he got underway at the half, uncovered he began to take aim on the leaders and had collared the pace setter Hot Summer Knight at the ¾ station and had 3 on the field at the top of the lane to hold off a fast closing Awol Hanover (Mac Sowers) in 2:00.1. Cinnamon Stick is trained by Gregory Decker. Greg Merton won a pair of race for the afternoon, the other win came aboard the slick gaited Air Guitar who was dropping down in class scored in 1:58 for trainer Mark Ford.

The Ole Man Racingtowardsadream shows no signs of slowing down as a 13-year-old, Brandon Parker guided the aged gelding to a win in 2:02 – $6.10 for trainer Steve Ray, it was his 3rd win of the season.