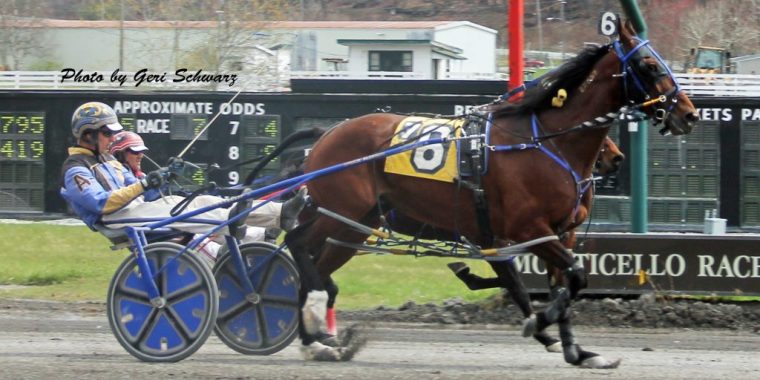 This week’s Open Pace saw a new face with Villiam who was making his first start since leaving Pompano and returning to his home turf was Nui Ba Den N and working his way up the ladder in class was Apex Seelster (Jim Devaux). Leaving with the gate saw a trio vie for the lead, Apex Seelster and Little Power (Cory Stratton) and Barnabas (Jim Taggart Jr) Little Power got there first but not for long as Apex Seelster quickly retook as thee pack hit the quarter mile marker in 27.4. Approaching the half Hestons Lucky Chip got under way as they tripped the timer in 57.3 following Trevors Ace, the tempo quickened as they paced the 3rd quarter in 28.3 hitting the ¾ pole in 1:26.1. Hestons Lucky Chip was 3 deep past this point with the pace setter Apex Seelster in his sights who had a slim lead on the pack at the top of the lane, as they paced down the lane the seasoned Hestons Lucky Chip had enough in the tank to win by a scant head in 1:55.1 with Bruce Aldrich Jr. in the bike, given little respect from the betting public who let him get away 9-1 he returned $19.40 to his faithful supporters, it was his second consecutive win in the Open The win gives Laura Perino 24 for the year, which ties her for third place with Chris Petrelli.

In the race for leading Dash Winning Drivers it is a real horse race as Mcgwire Sowers picked up a win on the card to tie the leader Jim Taggart Jr with 60 wins for the season.

Greg Merton and Bruce Aldrich each had driving doubles on the afternoon, the Mark Ford trainee Air Guitar scored again this week in 1:54.2, See Me Shine earned his first LT win in 1:57.3 with Greg Merton at the helm for trainer Nicholas Devita in 1:57.3