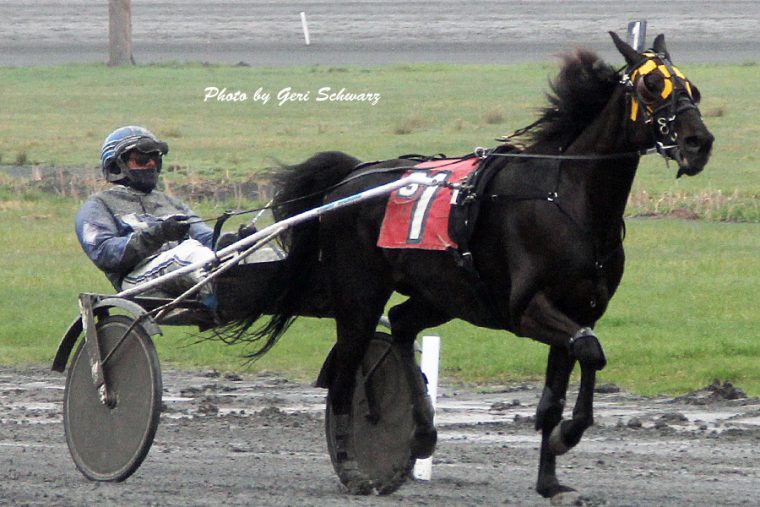 The muddy card saw leading driver Jim Taggart Jr. win a trio of races on the card, there were also 2 divisions of the North American Amateur Driving Association (NAADA)

In the first of 2 Open Trots on a heavy surface saw Hot Summer Knight win in wire to wire fashion in 2:00.4 over Makin Trouble K (Bruce Aldrich Jr.) and the out of town heavy favorite Golden Genes (McGwire Sowers) he was driven to victory by Michael Merton. It was the 3rd win of the season for the 11 YO gelded son of Justice Hall who is trained by Todd Buter and is owned by Lynette M. Buter of Milford, PA.

The first heat of the NAADA Trot, Joe Lee drove Pilgrim Caviar to the win over Judge Ken (Scott Keppler) in 2:01.4, in the second division is was Raceace in 2:01.2 for Owner- Trainer – Driver Alan Schwartz who scored a 3 length win over Winneress (Tony Verruso)

Leading driver Jim Taggart Jr had 3 wins on the afternoon which gives him a 3-win lead over McGwire Sowers, Taggart scored with Grand Priority 1:57.3 – $5.00 who notched his first seasonal win for the Richard Campolong trainee and then with Newbie in 1:58.1. Taggart saved the bet for last taking the final race of the day the Open Trot 2 with Chip Chip Conway in 1:59.1 in a wire to wire score, it was his 3rd win of the year in the open class for trainer Gary Messenger.