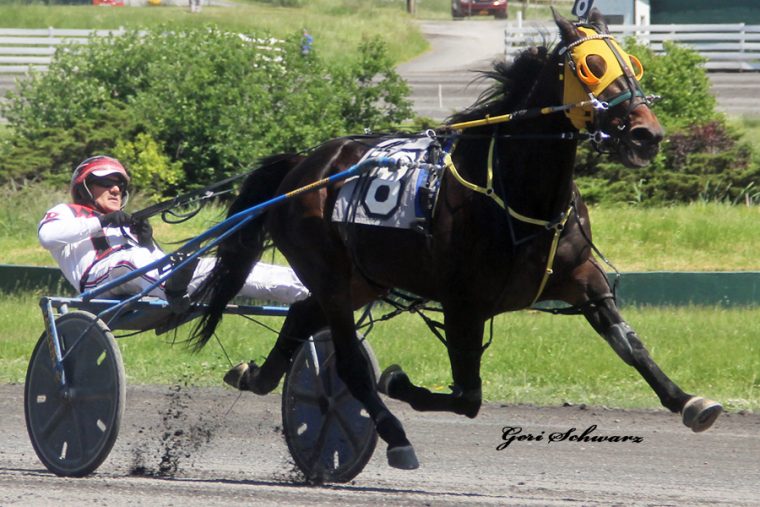 For the second consecutive week, Madhatter Blue Chip scored a wire to wire win over the best trotters on the grounds. Even with being saddled with the outside postposition (7) it did not deter him from reaching the winners circle. Driver Jimmy Devaux hustled the 10 year old of Muscle Hill right to the lead and never looked back, reeling off splits of 29.1, 59.3, 1:28.3, Crews Hilltopper took a shot at the leaders near the maintenance gate down the back side but was unable to gain any ground. Gruden with Austin Siegelman who started from postposition 2 and got away second was content to sit the pocket the entire mile behind Madhatter Blue Chip as he drew away by 3 lengths to trip the beam in 1:58. ER Shane (Bruce Aldrich Jr.) took show spot. The 1/5 favorite is trained by Ken Koch and it owned by Thomas Milici of Montgomery NY, it was his fifth win of the season.

YS Sunshine (Greg Merton) won his third race in a row this afternoon for trainer Ashley Eldred in a 5 length romp in 1:56.2. Letsnotforget (Lauren Tritton) is gradually working his way through the condition ranks, he scored in 1:55 for his second win in a row for Team Tritton.

Austin Siegelman returned to Monticello Raceway this afternoon and won aboard Camden Hill 1:57.2 – $5.10 for trainer Leah Posner. Trainer Bo Sower earned his 1,700 win as a trainer on the card.