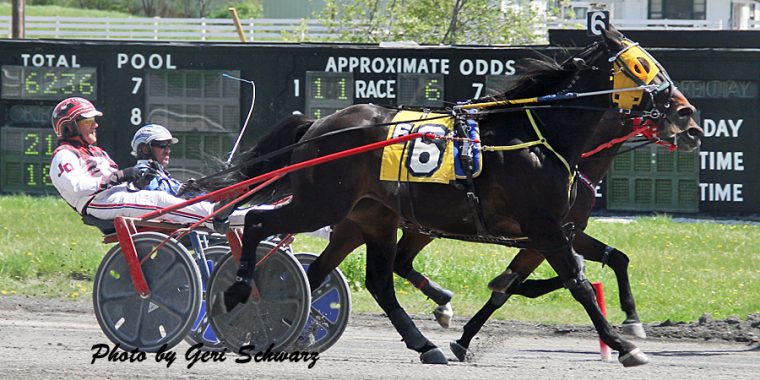 In this afternoon’s Open Trot the ultra-consistent Cinnamon Stick made an uncharacteristic break at the start of the race, sent off at odds of $1.40 and took himself out of contention. The out of town invader Stormy Dangles making his first start at Monticello after racing at the Meadows didn’t care for the 1/2 mile turns and made a break going into the first turn. After the dust cleared Madhatter Bluechip was on the front end, reeling off splits of 28.2 58.3, going down the backstretch Sweet Royalty also made a break at the 5/8 marker. At this point Madhatter Bluechip had 5 on the field, his lead dwindled in the lane and was able to hold off Racingtowardsadream by a head in 1:58.3, ER Shane was 3rd. Jim Devaux was the driver.

Madhatter Bluechip is trained by Ken Koch for owner Thomas Millici, it was the 3rd win of the year for the well bred son of Muscle Hill, out of the mare Fraulien Bluestone who is a ½ brother to Yonkers Trot Winner Leader Of The Gang $615,000.

Brandon Parker and Chris Petrelli teamed up for 2 winners on the day, Teeter notched his 3rd consecutive win in 1:56.1 and Jeffs Journey scored in 1:58.1.

Also on the card was 1 heat of the NAADA Consolation Trot going for a purse of $9,000, the heavy favorite Stormy Dangles and Skyway Tinacious made miscues in the first turn, Mr. Ridgetaker took the pack as far as he could but tired in the lane to finish 3rd behind the winner Makin Trouble K and Zagster in 2:00.3.